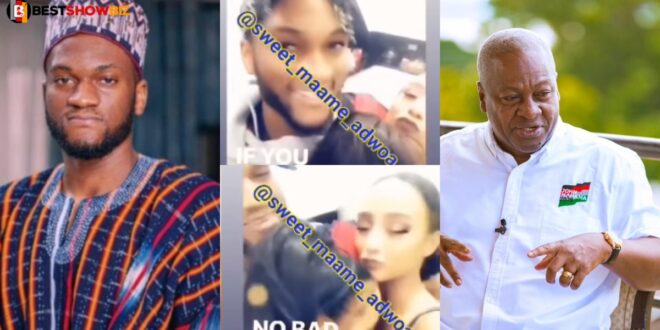 In a video obtained by bestshowbiz.com, the ex-president mahama’s son, “Shashid Mahama,” is shown enjoying a good time with a group of gorgeous young women in the fantastic city of Dubai in the United Arab Emirates.

Shahid Mahama’s video surfaced on social media as he was having a good time celebrating his birthday, which according to reports falls on August 16, 2021. The video first made its way into the internet when it was shared by his female companions, who captured him celebrating with these lovely girls in Dubai.

Because of their father’s status, John Dramani Mahama’s children are not very engaged on social media. They keep their activities hidden from the public eye, which is why many people are surprised by this video, but we also recognize that he has a life to live, just like anybody else.

Shahid is ex-president John Dramani Mahama’s second child, with Sharik Mahama being the oldest, followed by Sharaf and Farida, the lone girl among the four children.