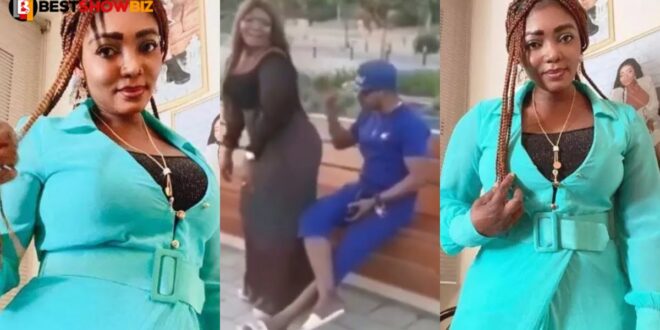 Florence Obinim, a Ghanaian Gospel artist and the wife of a popular man of God, Angel Obinim, has finally revealed the reason behind her large backside, which has been a popular subject on social media.

Just after a video of the Gospel singer showcasing her huge buttocks went viral, people speculated that she had undergone plastic surgery to get a curvaceous figure and enhance her buttocks.

The Gospel artist, on the other hand, has refuted such accusations, disclosing how she obtained her voluptuous physique and big buttocks.

Speaking in an interview with NshitT, Florence Obinim said that she acquired her curvaceous figure from her mother, who is also curvy.

She said that after having three children, she made a promise not to lose her shape after childbirth but to retain her flat belly, and she works out at the gym to maintain her current shape.

“I took after my mother and so people who know her and know me will not be shocked by my current shape. I vowed not to have to big tummy after having my babies so I exercise constantly”.
Share