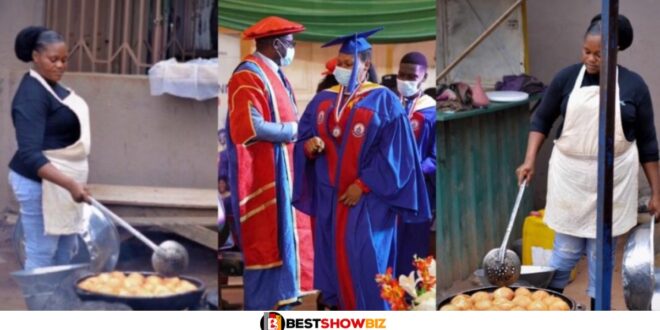 A Ghanaian graduate named Priscila Akwagu has been forced to turn to the business of selling “bofrot” (buff load) in order to maintain her standard of living.

After being out of work for several years, Priscila was forced to go back to her hometown and establish a meager livelihood there. He had no other option.

In an exclusive report for JOY FM, Priscila Akwagu said that despite having graduated with a first-class degree, she has had a difficult time finding work since completing her national service, which is the reason she is now forced to sell goods on the side of the road.

As a single mother who was overburdened with obligations, Priscilla claimed that she had little choice but to rely on her business talents in order to make ends meet.

“I finished junior high in 2007. After school, I found out I was going to have my first daughter. At the time, I was 17. So after I gave birth, I had to care for her. So, she was three years old in 2012. I chose to return to school. Because I had a child, I didn’t know what school to go to.”

“So, I went to Atebubu and asked a man for directions to the headmistress. She didn’t want to do it because girls like me always got pregnant again. But she changed her mind and let me into the school later. I didn’t know how to balance work and school.

“I lived in Kumasi with my brother. Where was my mom? So I started hawking in Kumasi. I used to work at a chop bar and sell sugar cane. My brother and I sometimes eat what’s left over to get by.

“I used to clean the chop bar and wash the dishes there. My mother used to sell “bofrot,” and she had to pay off debts. So I thought it would be smart to come to take over from her and pay off the debts.

“The business made money, which helped me pay off her debts.