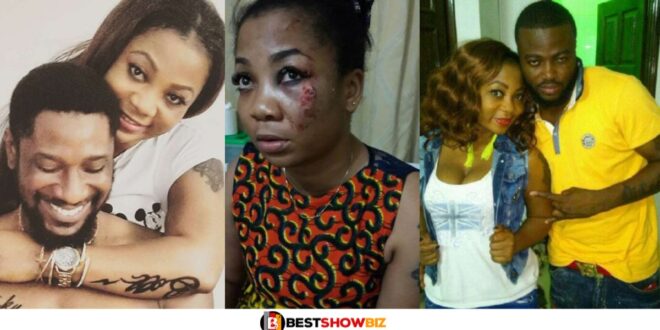 Vicky Zugah is a well-known Ghanaian Ghallywood actress. She developed an early affinity for performing and is now one of Ghana’s most sought-after actors.

Vicky Zugah has appeared in films such as My Darling Princess, Big Girl Club, Cross My Heart, and others. Vicky Zugah is a superb actress who has yet to win an award.

Celebrities like Benedicta Gafah, Afia Schwarzenegger, Shatta Michy, and Vicky Zugah have been abused by their lovers.

Vicky Zugah Disclosed Her Ex-Boyfriends’ Physical Abuse It was recently revealed that all her lovers had physically attacked her.

Actress Vicky Zugah said in an interview on Okay FM Ekwansodwoodwoo’s “Total Showbiz” program that all her lovers for the previous four years had physically mistreated her.

Vicky Zugah says she gets bruised beyond recognition when her lovers beat her.

In the interview, the actress named three guys who had abused her in the last four years.

Leo Mensah was among the men that assaulted the famed Ghanaian actress.

Cassad DJ Cash is another Ghanaian celebrity accused of attacking her. DJ Cash is a well-known DJ in Ghana.

He said he discovered her in a hotel cheating on him. Cassad In an interview with Zionfelix, DJ Cash denied ever assaulting Vicky Zugah.

They believe she can’t say sorry and if she keeps this mentality, she will approach menopause still seeking the right husband.”

Dj Cash for me I never abused Vicky. I admit she’s a nice lady who treated me well.

Unable to express apologies in a relationship or marriage will never find harmony or stay in.

Jumping from one man to another will not help her discover the ideal man since nobody is flawless, and she will still be seeking the right man when she reaches menopause.

If she says the proper thing, all guys will abuse her. A true guy doesn’t marry beauty but character, attitude, and behavior.

Despite her demeanor, I constantly tell Vicky she isn’t spiritually or psychologically ready for a guy. We had many disagreements, but I never slapped her

. It’s time for Vicky to stop hyping her relationships and focus on her two children with two guys.

S3x is not everything for a man In Zion, mutual respect counts “DJ Cash avow Vicky Zugah’s Boyfriends Always Assaulted Her When Vicky Zugah visited Prophet Prince Elisha at his church, he disclosed the reason why every male she dates assaults her.

According to the man of God, the actress dated a married guy whom she was urged to cut all relations with but she ignored the advice since he lavished her with money.

Vicky Zugah contacted her married lover and told him what his wife told her.

The married man who couldn’t lose Vicky Zugah then beat her wife. In her absence, the enraged lady curses her in front of her.

Vicky Zugah abducted her husband and cursed her to never be considered seriously in any relationship she finds herself in till she dies.

To escape the curse, the famed Ghanaian actress must apologize to the insulted woman.

Vicky Zugah Apologizes To Wife She Snatched Vicky Zugah, her Pastor of Prophet Prince Elisha, and her family apologized after a protracted search for the widow whose husband was taken.

Vicky Zugah’s apology was accepted by the offended woman.

Lesson to be learned What the prominent Ghanaian actress went through shows that anything you do today will have consequences in the future. You receive what you sow.

Vicky Zugah had no idea that what she did a decade ago would affect her future.

images of Vicky Zugah ex-boyfriends whom she claims physically abused her.