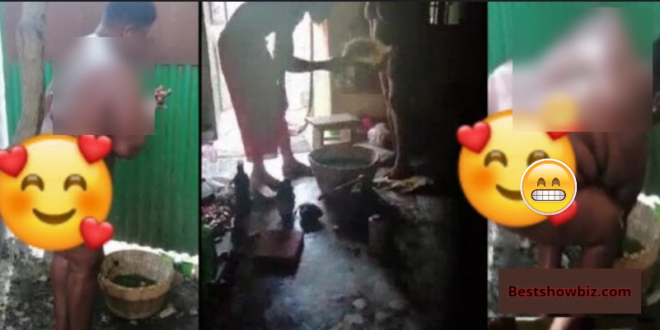 According to reports, a fetish priest in the Eastern area leaked semi-nvde videos of a woman who had come to his shrine to request his help in the contested enstoolment of a new Okuapemhene.

In May 2020, Oseadeeyo Kwasi Akuffo Ababio was sworn in as the new paramount chief of the Akuapem Traditional Region, replacing Oseadeeyo Nana Addo Dankwa III, who passed away six years ago.

The Judicial Committee of the Eastern Regional House of Chiefs ruled on the Akuapem chieftaincy issue, putting an end to years of lawsuits between two groups over who should be rightfully elected as the next chief of Akuapem.

According to the report, Atta Magali was caught on camera chanting to destroy President Akufo-Addo, the new Okuapemhene Oseadeyo Kwasi Akufo II, Victor Newman, a former presidential staffer, among several others who supported the new Okuapehene’s installation.

Atta Magali could be heard chanting to the gods in a piece of fabric around her waist in one of the leaked videos from the shrine of Torgbe Shitor, the fetish priest working in Akyem Kukurantumi of the Eastern Region, saying: “agoo agoo, nananom it is me Attaa sister to Kwasi Akufo who is being refused the Okuapemhene stool.”

She went on to say:

“I am the one putting this photo into the coffin. Anyone who is part of this grand scheme from the family must be killed and summoned to the wilderness to answer.”

The woman in another video was requested by the fetish priest to undress and render incantation over a concoction prepared in a bucket, as well as list the names of people working against Odehye Kwasi Akufo and his relatives, according to the outlet.

“Those who have tied our souls in the middle of the Akropong so that we don’t get the support of the subjects must be dealt with -Sammy Mfum, Nana Ofei, Baamuhene, Victor Newman, President Akufo Addo are all included. Nananom deal with them and also protect our family. Now, I bath this concoction to cancel any death on our family and send it back to them,”