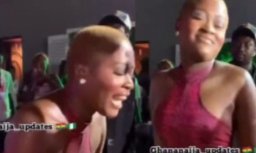 The Frimpongs, also known as Fella Makafui and Medikal, are undeniably one of the best couples in the nation and have been incredibly supportive of each other throughout their relationship.

Despite the fact that we occasionally hear from their end about breakups and divorces, the couple has been able to pull through it.

The fact that the couple is so supportive of one another and of each other’s professional endeavors is yet another positive trait associated with them.

Fella was seen showing her support for Medikal once more in a video that was released not too long ago.

She was dancing for him while he was performing.

Fella shook her massive nyash in the trending video that is making waves on social media.