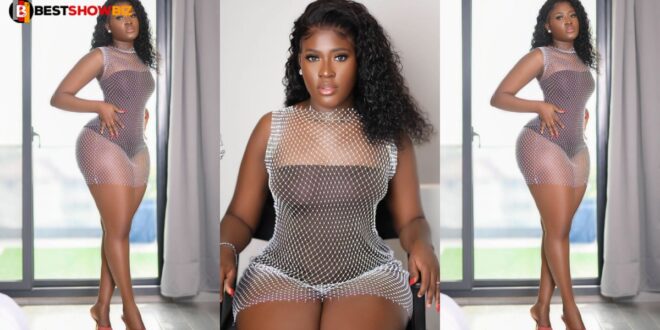 Fella Makafui, the wife of famed Ghanaian musician Medikal, has released yet another semi-naked photo that has sparked outrage.

This isn’t the first, second, third, or fourth time the actress has shown us more of her body, and it certainly won’t be the last.

Eddy Blay, one of those who is bored with her actions as a married woman, has taken notice of her most recent one.

Eddy believes it’s past time for the former YOLO starlet to accept her status as a married lady and dress accordingly.

He stated that Fella is a public figure, and her fashion sense has a direct influence on the young people who look up to her, and he has no idea what kind of message she is sending them right now.

Eddy also tells Fella Makafui that her public display of her body is an act of those who sell their pride for money, also known as Slay Queens, and that her actions as a married woman are no different than those of others.

“It’s past time for Fela Makafui to start dressing like a respectable married woman and quit dressing in her underwear.

What type of message is she giving to the newcomers? She’s no different from the slay queens. ” He stated

Eddy also urges Ghanaians to be able to tell when famous people are on the right track so that future generations are not misled.

“We have to be able to urge our superstars to do the right thing because so many people look up to them,” he added. “The truth hurts, but it must be told.”