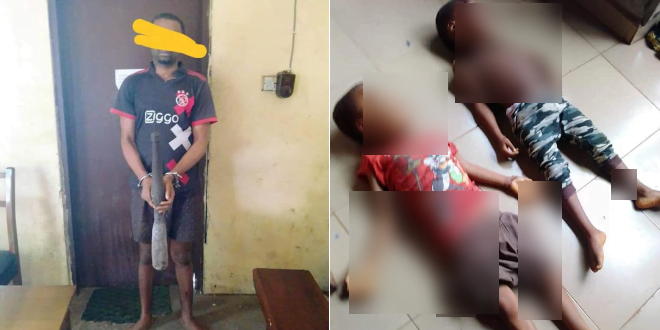 Views discretion is advised on the following pictures that will be shared in the story.

Father’s day was a day were the world celebrated all father’s in the world, but one man made the day a horror show for his family and his neighbors.

Mr. Ifeanyi Apusiobi, 34 years of age, had the guts to kill two of his bilogical children with a mallet whiles the kids were in their sleep.

Ifeanyi also wounded his own father , 72 years old Dominic Apusiobi with the same mallet after he tried to save the kids.

Dominic was lucky enough to escape around 1am and reported the incident to the police who rushed to the scene.

It was too late when they arrived, both kids were dead.

It is still unclear what might have moved him to do such a horrible thing, but the police are doing investigations on the issue and will get answers soon.

The incident happened at Azu Ogbunike in Oyi LGA of Anambra State.