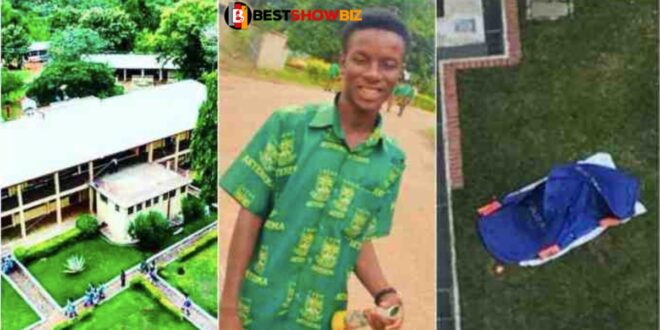 The father of a final-year Tweneboa Kodua Senior High School student who died after unintentionally jumping off a wall on campus has provided a narrative that is in direct conflict with the official account of the incident.

In order to evade a regular inspection by a Prep Master, Edward Duut, then 19 years old, allegedly jumped a wall and landed with his chest on the ground, hurting himself and subsequently passing away at the Kumawu Polyclinic in the Sekyere Kuawu District of the Ashanti Region.

Deputy Superintendent of Police Opoku Agyemang Prempeh of the Sekyere Kumawu District Police said, “Police have not yet made an arrest in connection with the death of Edward Dute, despite the fact that we have taken statements from teachers.”

“The deceased accidentally landed with his chest on the ground after he allegedly scaled a wall to avoid a routine check by Prep master on Monday night,” DSP Opoku Agyemang explained.

“At around 11:00 p.m. on Monday, I received a distress call from campus informing me that my son had been badly hurt. The kids informed me over the phone that my son was sleeping in the dormitory between the hours of 7:40 and 8 a.m., so a teacher went into their room and forced us away, causing Edward Dute to wake up and accidentally jump from the third floor of the dormitory and land on his chest.”

Mr. Dute, who could not keep the tears from streaming down his face as he recalled the final minutes he had with his son over the phone, went on to say:

‘As a result, I directed the pupils to hand over the phone to my son, who was, according to the students, laying down in discomfort at the time.’ So I inquired of my son as to what had transpired, and he answered, “Daddy, I am feeling dizzy and tired, so I cant talk.”

In his statement following the chilling accounts, the deceased’s father stated that he was surprised that school officials told police that “my son was avoiding prep, and that he jumped a wall and hurt himself,” and that “on that fateful day, I had first-hand information because I had the advantage of speaking to my son on the phone before he passed away.”

According to Mr. Dute, who believes his son would not have died if he had been brought to the hospital in time, the school officials’ competency has been called into doubt.

“The students informed me over the phone that my son’s incident occurred around 8:00 p.m., but that he was left at the scene for nearly four hours, indicating that the teachers did not perform their duties properly.”

The final year student was due to finish his final West Africa Senior School Certificate Examination (WASSCE) paper on Thursday, October 7 but couldn’t live to complete it.