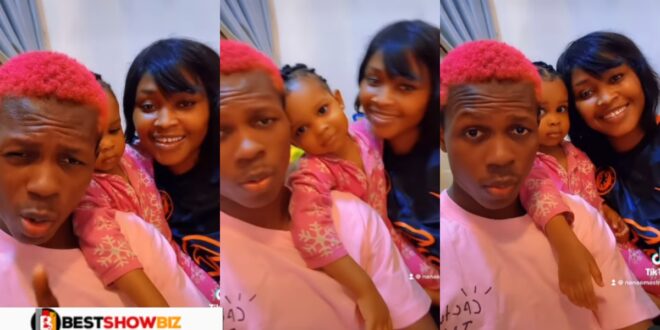 Father of the Year: See How Strongman Did His Fatherly Duties As He Spends Time His With Wife And Daughter

Strongman Burner, a Ghanaian rapper and former signee of Sarkcess Music, has been spotted spending time with his family in a viral video that has gone viral on social media platforms.

The musician, who recently became a father, decided to take some time off from his hectic schedule to spend some quality time with his family, which he was seen doing.

The rapper, his baby mom, and his daughter Simona can be seen jamming to the song, which was produced by the great Kojo Antwi, in the video, which is quickly becoming popular on social media.

Many people who have seen the video have expressed their admiration for Strongman’s ability to keep his family’s needs at the forefront of his mind at all times.