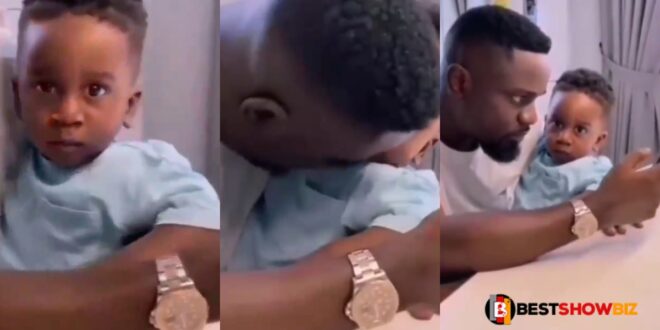 Fans are praising Ghanaian musician Sarkodie for holding his kid Junior in his arm in a video.

According to the footage, the child relaxed in his father’s left arm as the father fiddled with his phone with his other hand.

Sarkodie halted at one point and kissed his son on the face.

Junior kept a severe expression on his face and refused to grin, according to Bestshowbiz.com.

He imitated his father’s expressions in the photographs, and as a result, he looked a lot more like him.

Sarkodie has been shown to be a kind parent who prioritizes his children.

Read Also  Kevin-Prince Boateng rejects his brother Jerome after he appeared in court for domestic violence against his ex-girlfriend.
Share