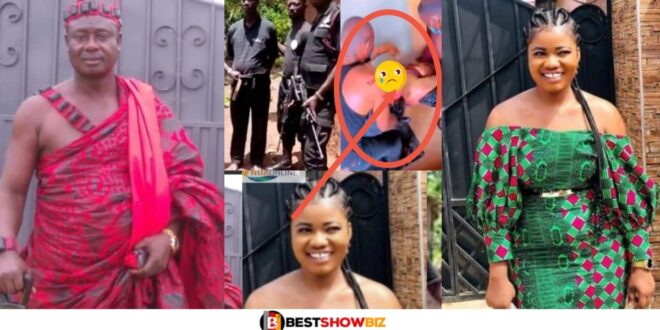 Family Of Asor (The nurse who was k!lled by a chief and a pastor) Nearly Beat Her K!llers In Court

At the Cape Coast Magistrate Court, the family of the deceased nurse, Asor Botchwey, almost gave the suspects a severe beating. Botchwey was a nurse.

At the court, the matter was delayed until Monday, November 8, 2022. While Nana Clark and Pastor Darko, the suspects, were walking on the aisle, the bereaved family pounced on them while they were walking.

If it weren’t for the intervention of law enforcement, they would have been severely beaten.

After being detained for the murder of Georgina Asor Botchwey, 25, a potential nursing student, the two suspects, a pastor, and a chief, confessed to the crime after they were interrogated about it. Botchwey was 25 years old.

According to a report by TV3 Ghana, they told authorities that they committed the murder as part of rituals involving money.

The pastor directed the team of detectives to Nana Crack, the Tufohene of Ekumfi Akwakrom, where the body of Georgina Asor Botchwey was discovered.

According to reports, after kidnapping her, the two may have engaged in multiple sexual encounters with her before killing her.