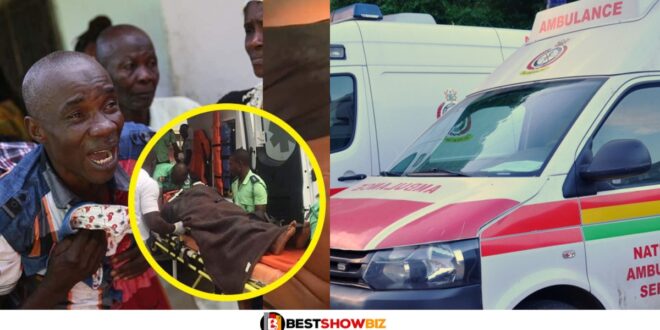 family of a pregnant lady who died because of ₵600 for ambulance fuel tells her husband to marry her before she is buried.

It appears that the widower at the center of the Takoradi ambulance delivery saga is facing new challenges.

He has spent the last four years living with his late wife, Augustina Awortwe, and they had two children together.

Families are aware that they are living together despite the fact that he has not done the entire marriage rites of the lady. There had been no problems in the household until the young lady died unexpectedly.

She had gone to the Holy Child Hospital in Fijai, Takoradi, to give birth when her difficulties became life-threatening. She was moved to the Korle Bu Teaching Hospital in the Greater Accra Region, but her husband’s inability to provide GHC 600 to purchase gasoline for the ambulance exacerbated the issue.

They were forced to return to Takoradi while his wife was still suffering in the truck, which resulted in her early death Mr. Obiri Yeboah, her husband, has now blamed the ambulance service for his wife’s death owing to their lack of professionalism.

While he is still considering bringing the ambulance service to the court, his wife’s family has lured him into yet another argument. Unfortunately for him, the family requires that he legally marry their relative before the funeral can take place.

As a result, he must complete the marriage ceremony for the family before they would assist him in burying her. This is a typical occurrence in various Ghanaian communities.

Before living together, males are expected to execute all of the marriage customs of the ladies they desire to take as wives.

Many people, however, ignore this law and choose to live with the lady under the same roof with the aim of conducting the marriage procedures later.

The tragic side of the situation is when the lady dies.

This is the point at which the family begins to make demands. Mr. Obiri Yeboah, the late Augustina Awortwe, has placed his late wife’s remains at the Dompoase morgue in the Shama District.

He is also dealing with the circumstances surrounding his wife’s death, with the goal of pursuing legal redress. The biggest challenge now is figuring out how to marry before the burial.

Meanwhile, the Holy Child Hospital in Takoradi has declined to comment on the situation. They have informed the public that an official announcement would be issued soon.