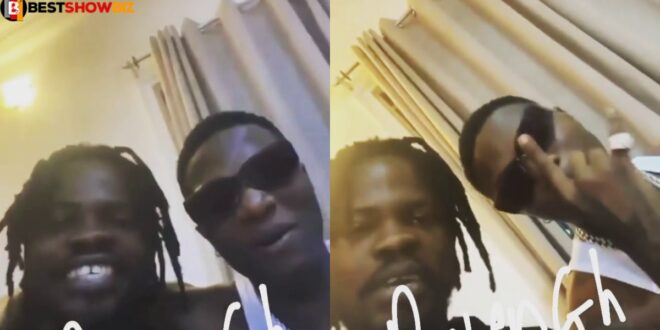 Fameye overjoyed after he met Wizkid for the first time

Fameye, a Ghanaian artist, has seen his goals come true and he can not contain his pleasure.

After acting like a child in a candy store when the Nigerian superstar followed him on social media, the artist has finally met Wizkid in person.

When Nigerian star Wizkid followed him on Twitter, the “notin I get” singer was overjoyed.

He thanked Wizkid in a series of tweets and informed his fans that the Starboy was following him.

Fameye’s fans were dissatisfied with the musician’s behavior and called him to order.

Fast forward to now, Fameye and the Grammy award-winning artist have met, and Fameye is overjoyed.

He posted a video on social media to show the world that he was hanging out with Wizkid and that the artist could perform his current song, “praise.”

Wizkid was even seen dancing and singing the famous song word for word, including the twi portion, in the video.

Wizkid was accompanied by his Ghanaian pals Paedae and the R2Bees team, and Fameye was also present.

The video has garnered positive feedback, with social media users praising Wizkid for being able to sing Fameye’s Praise song word for word even in the middle of the night.

Fans are expecting a collaboration between these two great musicians and are hoping for Fameye to get a free verse from Wizkid.

Because of his conduct surrounding Wizkid and Co., several reviewers labeled Fameye as a C-list musician.

Others argued that Fameye is proof that dreams do come true if you believe and that the singer had just witnessed one of his many dreams come true.