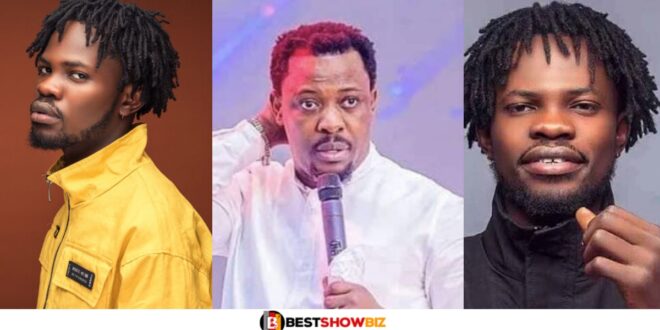 “Fameye is ungrateful, I was the one who prayed for him to become famous”- Nigel Gaisie

Prophet Nigel Gaisie has told Fameye that he doesn’t like it that he hasn’t thanked him.

In a statement on Facebook, the founder and head of Prophetic Hill Chapel admitted that he was the one who prayed for Fameye to achieve fame.

He lamented that the ‘Notin I Get’ hitmaker had overlooked him after he achieved success.

On his birthday, Prophet Nigel stated that he was asking God to help Fameye recognize those who assisted him.

“I prayed for him to be big by the mercies of God, coming back to say thank you, Jesus, bless you prophet of God is even a problem.

“It’s your birthday, I pray for you in that you will give God his due and appropriate people who as it were, helped you on your way of becoming who you are now; Fameye…PNG,” he wrote.

However, after receiving criticism from other social media users, the message was taken down.

Below is a screenshot of it.

Read Also  Papa No Saga: Mzbel arrested by Ghana Police for this reason - find out