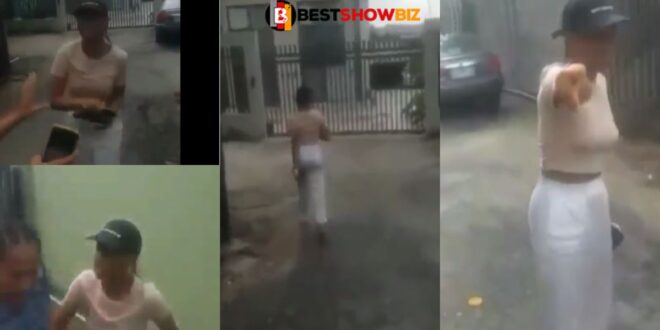 The generation of slay queens is a disease on the planet. They are the biggest braggarts around, but it is a fact that they have nothing underneath the logo.

They possess nothing, they have nothing to offer, and they are frequently seen as a burden on others.

They are also obnoxious and arrogant.

One of these shameless slay queens was exposed by a Bolt Driver after she ordered a trip from him and failed to pay owing to being broke as usual.

After the broke slay queen, who could not pay her fee, tried to be clever and put him in trouble instead, the driver resorted to IG live to vent his concerns.

As a result, the driver decided to start a live video and broadcast the incident to the entire world.

The lady, according to the driver, directed his automobile from Banana Island to another location.

She was talking on her phone the entire ride, as if she had something urgent to attend to.

She partitively requested the driver to halt the car while traveling on a highway at one point during the voyage.

He informed her that they were in a dangerous location and that he would move forward a little to ensure a good parking spot.

The slay queen had gotten out of the car and was going away without paying when he arrived.

She was still on the phone the entire time.

He chased her down and attempted to stop her from leaving.

She began yelling that he had put his hands on her and that she would call the cops and have him arrested, among other things.

The issue became a subject of IG live to expose the lady at that point.

She can be seen in the video approaching the man furiously and attempting to assault him while he was filming his video.

Slay queens all around the world are in pain! How can you be returning from a wealthy location such as Banana Island and not have enough money to pay for a standard Bolt ride?

Her Oga apparently chopped her for free and refused to pay because it was embarrassing for her to be without money.

She tried acting smart instead of trying to find a compromise — these slay queens are too stubborn for their own good!