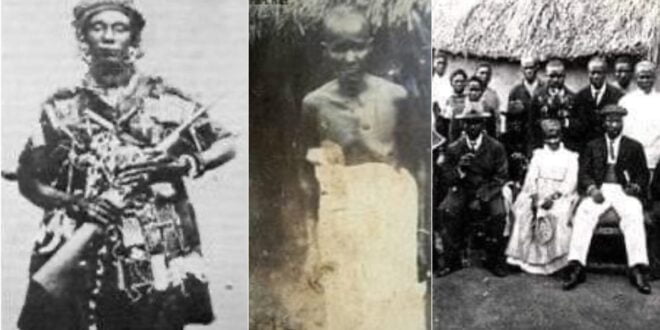 (Fact) Yaa Asantewaa was an Old woman and Never went to war.

I’m also surprised that Yaa Asantewa’s picture was outpaced by an artistic impression. When Lady Hodgeson met Yaa Asantewa, she viewed her as a wise old lady who sat near Nana Mensah of Obuabasa stool.

This meeting took place in 1898. Yaa Asantewa was much too old to fight. I’m still waiting to see where she’ll fight with the weapons.

When King Kwadade was defeated, Frema Ototua of Takyiman went to the Adinkra War and Yaa Asantewa of Akuapem went to the Sokode War at Krepe.  Yaa Asantewaa’s story, on the other hand, is frequently written from an Asante viewpoint.

We don’t really know if the image or story of Yaa Asantewaa is real anymore. According to Akan culture, women should not go to battle, and the Yaa Asantewaa of those times never went to war. She was more like a priestess who bolstered her warriors’ combat abilities.

Her current story became more popular after it was published in simple school books for studies in the early 1970s.

Nobody contested it or double-checked it because they wanted stories from Ghana to teach and practice from.

As a result, the majority of our writers and publishers lie to us by writing through their imagination rather than science. Yaa Asantewaa’s story in Ghanaian popular books varies from the story told in Ejisu, where she was born.

Under the watchful eye of GES, NACCA, and the Ministry of Education, these same writers and publishers are now writing ethnocentric and misleading materials for studies. If they are not questioned, like certain people are, they will remain and become part of our narratives.

Historians say that this is not the true Queen Yaa Asantweaa. It seems to have been used as a’symbolic’ representation of her. The name of the woman in the photograph is reportedly unknown.