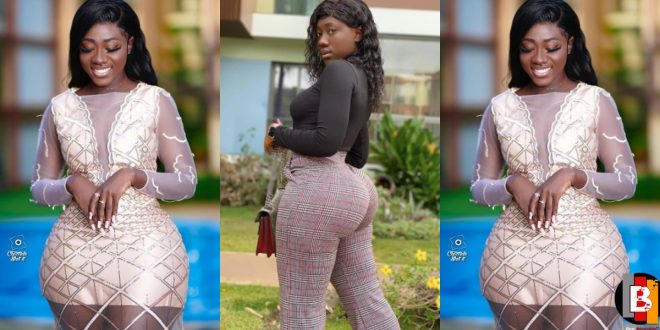 Hajia Bintu: Everything to know about the Tik Tok sensation

Hajia Bintu, ever since she came into the limelight with her viral video on the TikTok platform, has never failed to get her fans entertained. She is noted for getting people all over her photos on social media.

She’s an entrepreneur, a model, and a Social media influencer with over 400k followers and 560,000 followers on Instagram and Tik Tok respectively.

Hajia Bintu is known by almost everyone in Ghana but she hardly opens up about herself and much about her private life is not known by her fans.

Well in this write-up, we look at the personal life and other things about the curvaceous Ghanaian socialist.

Hajia Bintu was born on 30th November with her birth year still withheld. Although her name suggests she’s a Muslim, but she is a Christian with the real name Naomi Asiamah.

She is a student of Koforidua Technical University where she’s studying a course in Hospitality.

Career and Net Worth

The social media Goddess became publicly known at the start of 2020, having started growing her TikTok page with videos of her huge backside which attracted lots of people to follow her.

She’s been nominated in some award schemes in the country including the Ghana Social media business and creative arts awards, where she was nominated in the Vibrant Tik Tok account category.