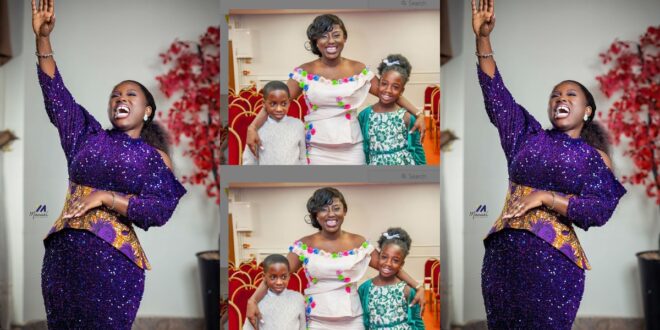 Diana Hamilton, a gospel singer from Ghana, has spoken publicly about the challenging years of her married life during which she was unable to have children.

She struggled to conceive for more than six years before she finally did, and she went to sleep every night with tears in her eyes. When she finally did give birth, she was overjoyed.

In an interview that aired on JOY Prime, Dian Hamilton stated that as a result of what she went through, she strongly believes that women who are unable to have children should be treated in an equitable manner.

“I cried at the end of every month when I was hopeful and it didn’t happen. Like a Christian, you don’t cry like an unbeliever, you cry as somebody who has hope.”

If you don’t cry, then you’re being a hypocrite. So I cried, but I trusted God and, when God did it, it was a miracle.”

Diana Hamilton also mentioned that the most of her songs were motivated by the happiness she felt after beginning the process of having children. When she thinks of the cruel treatment she received and all of the tears she shed, she believes they were all for a reason.

The singer who became famous for her single “Adom” went on to say that one of the darkest times in her life was when she was attacked with a fatal ailment that came dangerously close to taking her life.

“I was hospitalised for six days or so and they couldn’t tell what it was and fear gripped me because it was at the height of Covid when nobody was allowed to come in and I was afraid for my life.”

“Tests were run and they couldn’t tell me what it was. My infection rate was going up, they were trying every antibiotic [but] in the height of my fears God brought me healing that was mind-blowing.”

Diana Hamilton, who is 43 years old and married to Dr. Joseph Hamilton, has a pair of identical twin children (Michaela and Michael).

Read Also  So Sad! Leaked Audio of Tracey Boakye and Mzbel talking on Phone about having an affair with Mahama Leaks Online (audio)