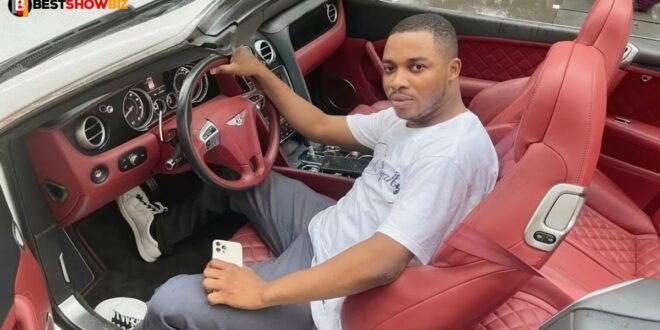 Twene Jonas is back at it again, launching barbs at those who despise him for his genuine insults. While doing so, he displayed his automobile, claiming that even the kings of his hatters had never seen anything like it.

When it started to rain in his video, he was walking about the city, recording and displaying it live on Facebook, so he quickly ran to the other side and packed his car.

He proceeded to brag around the car, telling Ghanaians that he was constantly described as a hungry man on the street asking for pennies to buy food. But he makes it plain to everyone that he is extremely wealthy, having purchased an automobile that even kings have never seen before.

“To those who hate the truth. You know your leaders are not doing the right thing. So allow me to insult them ok?”. He stated.

“Even your Kings have never seen this car before”. “But I am using it just like that”. He brags.

You can see the entire video below.