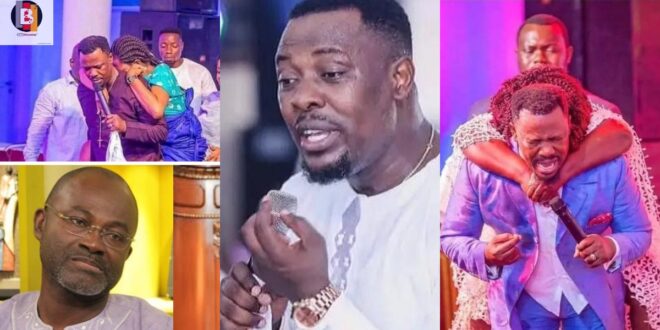 Kennedy Agyapong’s accusations that Nigel Gaisie is promiscuous have been subtly proven to be true after the man of God took to an interview with Popular TV show host, Kofi Adoma.

According to the controversial man of God, there’s no need to be surprised by the fact that he is attracted to women because he is not a homosexual.

Nigel Gaisie was however fast to add that the allegations leveled against him by Agyapong are preposterous and not true.

“I’m always being accused of having girls by Kennedy Agyapong and I thank God that I’m not gay”, he said on Kofi TV. “He (Kennedy Agyapong) who is even an old man has a lot of girlfriends and he has given birth like a pig”

In the previous few years, Gaisie and the lawmaker have been on a warpath. Kennedy Agyapong said the allegation that he is down with a stroke by Nigel Gaisie was a lie.

Read Also  Eazzy: “I Have A Male Friend I Call Whenever I Am In The Mood For S3x”

In his response, the man of God also served notice that he will match Kennedy Agyapong “boot for boot” this year.