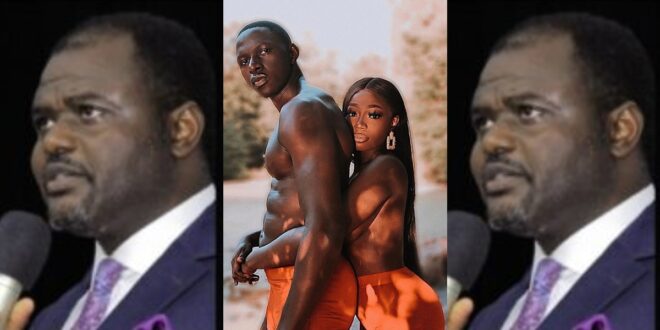 ‘Eve was deceived by the snake because Adam was not giving her attention, Women need attention,’- Pastor

Prophet Samuel Nyarko, the founder and leader of the Church of Nazareth, has made a stunning announcement about women that has stunned the whole world.
In an interview with Air Commander, which was broadcast on browngh.com, the pastor claimed that of all God’s creations, women are the only ones who seek significant attention at all times and in all locations.

He said that if it weren’t for the nature of sex, Satan would not have tricked Eve in the Garden of Eden. He backed up his claims with the Bible.

According to him, after God created mankind and put them in the Garden of Eden, Adam refused to give Eve the attention she required, and as a result, she was still left alone, resulting in everything recorded in the Bible’s book of Genesis.

Read Also  “Coronavirus is trying to sabotage me”- Shatta wale.

When Satan, dressed as a serpent, came to visit Eve, he kept her company, attracted her attention, and took advantage of the opportunity to introduce her to the fruit of truth and wisdom, according to Prophet Samuel.

“Women need attention; if you are listening to me, keep your wife protected, listen to her, and give her the attention she requires; Satan deceived Eve because Adam was unable to provide the attention Eve required. Don’t put yourself in that position; you’ll be sorry.” He counseled.