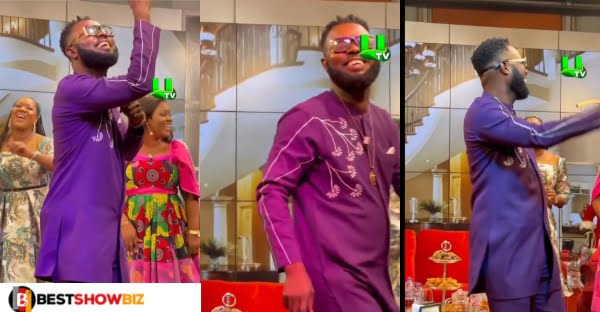 Ernest Opoku, a gospel artist, has been seen dancing joyfully, and many believe it’s because of Nayas’ broken marriage.

Opoku, in case you forgot, went through hell at the hands of Nayas simply because they dated for a few months.

She physically hunted him down in a studio while watching a show and scolded him like a kid.

She also spent months ruining his reputation via allegation after an allegation in the media.

By the time Nayas finished with Opoku, his name had been dragged through the dirt and his reputation had suffered a significant knock.

He took a long time to recover from it, but he is currently doing much better.

Read Also  "my money is not blood money or scam; I have a covenant with God"- Medikal

We believed everything was OK for Nayas until she came out and admitted that her marriage had ended in divorce.

Apparently, she had been ‘duped’ by her German Boga spouse, whom she mistook for a millionaire.

Nayas married him on the pretense that he would provide her with 500 euros per month, but after the wedding, she learned that Opana was broke and working in Germany.

As a result, Nayas has left him and stated that she is no longer interested in the marriage.

Opoku was a guest on United Showbiz over the weekend.

He was seen singing and dancing in joy and to God’s glory.

According to fan comments, Opoku is overjoyed since Nayas’ marriage has been destroyed.

“When you learn your ex’s marriage has failed chai,” one user commented of Opoku’s dancing.

Check out Opoku giving off his moves in the video below…