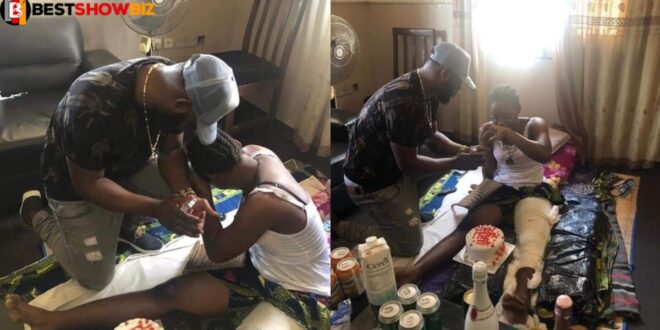 emotional Photos of a man proposing marriage to his bedridden girlfriend touch the heart of Netizens.

After his ‘out of Hollywood’ love gesture spread beyond the four halls of social media, a Nigerian man has warmed hearts online.

In a series of images, the man is shown proposing to his girlfriend, who had been bedridden for months due to an accident she was involved in.

He also ordered her some drinks and a cake, but the cake was effectively engraved with the words “Will You Marry Me?” Ade Emmanuel Ibikunle, a LinkedIn user, uploaded lovely images to the network.

“She had an accident that rendered her bedridden, but her man proposed to her while she was in the hospital,” he wrote. “Love is lovely.”

Check out the images below.