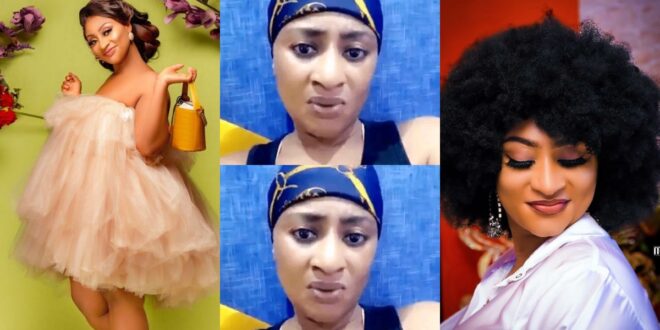 Ellen White stop going to SDA because of earrings + all you need to know about her.

The Kumawood industry is based in Kumasi, Ghana. It was created by Samuel Kwabena Darko, an African entrepreneur.

Kumawood has nurtured many movie stars. Ellen Kyei White’s popularity in the movie business can be credited to her absolute dedication and astute mind. Her dad died when she was 5 years old, and she was adopted by her mum (daddy’s third wife).

Ellen White entered the Adventist Elementary School and later went on to the Adventist Day Senior High School. However, it was when she was sent on an errand to Adum, Kumasi that Ellen ‘ weirdly’ had her first stint in a movie, although under ‘ weird’ circumstances.

Ellen claims a director identified as Jackson K. Bentum found her and told her that he saw something he likes about her. Never did she realize that he saw an actress perform, which contributed to her appearing in a movie as the girlfriend of a renowned producer.

After starring in that film, Ellen travelled to Germany and then changed the scene to England to find greener pastures. But after being battered by the snow after the bus didn’t show up while she was working with a grocery store, she chose to leave and move to her home country.

After a few plays, the producer offered her a chance to be a lead star. Since then, she has never looked back. She also made several movies under the production name, White Movie production. She is currently an ambassador for the Black British Film Awards.

She has been an Adventist since birth, but it is claimed that she abandoned the church because of the doctrine forbidding earrings for ladies.