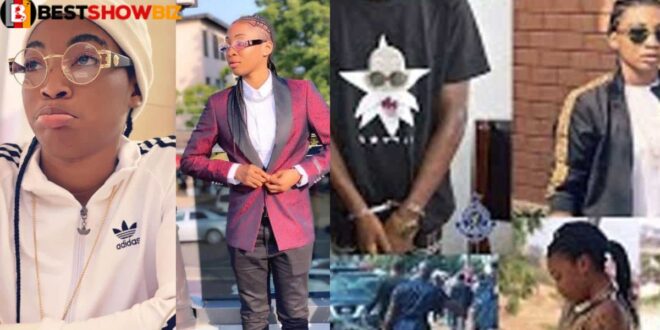 The young man who was accused by lesbian Elladeevah for raping her has spoken up about his side of the story.

Stephen Evans Essel Mensah, a young man, claims to be Ella’s boyfriend and has been in a relationship with her for three (3) years.

He explained that he met Elladeevah on the hook-up app Tinder, but that after seeing her, he recognized she was far too young for that.

In a talk with some of Elladeevah’s acquaintances, Stephen said that she informed him she was a Ghanaian from the Volta Region during the early stages of their relationship.

Ella revealed that she wanted to start a business and that she needed to go to Nigeria to acquire some wigs to sell, and it was at that time that he discovered she was Nigerian.

On the subject of rape, he indicated unequivocally that he is innocent of the charges, adding that he is baffled as to why Ella would chose to repay him in this manner after everything he has done for her.

Still, when it came to rape, Stephen disclosed that the other two people Elladeevah mentioned in her video were her landlady’s mentally ill children.

Even with those two people, he indicated over the phone that only one of them remains in the house with them, with the other staying in Dansoman.

Stephen revealed that Elladeevah had been residing at his house for the previous two weeks before coming out to talk about her claimed rape, and that even the neighbors are aware of her personality.

In the phone discussion, Stephen acknowledged that he had to get to Koforidua in order to avoid being arrested for the claims.

He also stated on the recording that he had a large number of witnesses who can testify against what Elladeevah said on social media because they were all present when she began acting strangely.