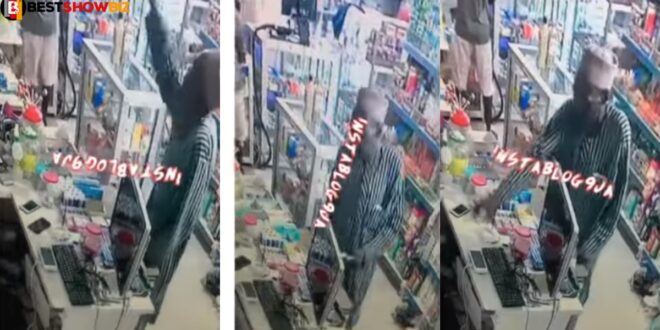 The tactics used by an elderly man to steal a mobile phone from a pharmacy have been revealed by closed-circuit television (CCTV) footage.

Although many bizarre videos have recently appeared on the internet, the majority of them leave viewers in a state of shock and amazement.

One such video, which can be found on Instagram, shows how an elderly gentleman easily gains entry to a pharmacy and steals valuable items.

He entered the pharmacy and pretended to pay, but he was quick to steal the mobile phone from the cashier’s desk.

The video, which is circulating on social media, shows the man, who is dressed in a thobe, approaching the counter to pay for the drug he purchased, but he quickly flees with the phone.

He assumed no one was watching him when he picked up the phone, but the surveillance cameras were set up to record his actions.