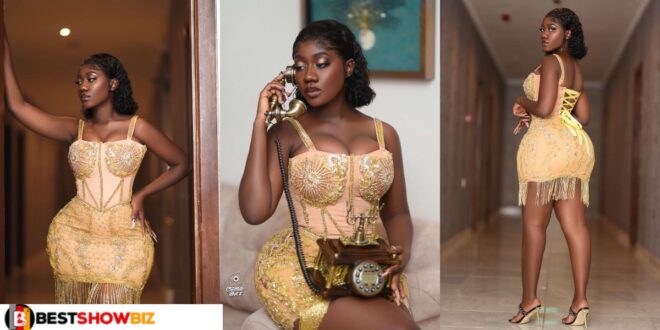 Hajia Bintu, a Tiktok star turned celebrity, has returned to her online comfort zone and shared some stunning photos to celebrate her birthday.

Hajia got herself into trouble a few days ago after some no-makeup photos of her surfaced on the internet.

People had been seeing a completely different picture of her on the internet, and her legions of fans were extremely disappointed by the photos.

With her humongous backside and dark natural beauty, Bintu had made her way from Tiktok to Twitter and Instagram, where she gained a following.

Her photos, in which she accentuated her imposing rear end, quickly went viral on social media.

However, once again, people became too engrossed in the phoniness of social media, forgetting that real life is never the same as what you see online.

When her no-makeup photos surfaced, they painted a very different picture.

Hajia Bintu is now back online, attempting to erase that image from people’s minds.

She has returned to her studio, applied her makeup, and displayed her most attractive side once more.

Today is Hajia’s birthday, and she has decided to grace us with her presence.

It was revealed that she had shared a slew of photos from her Bintu days.