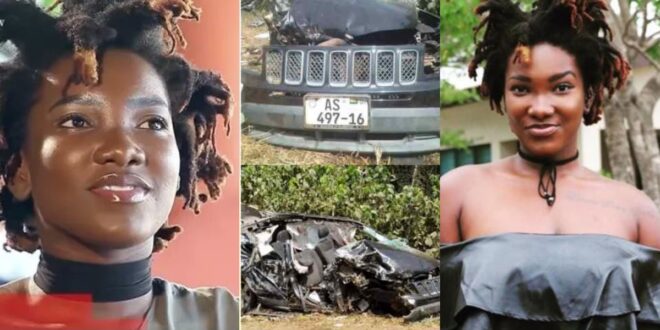 Ebony’s Driver who survived the accident is being prosecuted after police discovered he was driving with an expired license.

Okoh Pinehas Chartey, the owner of the car that was involved in the crash that fatally resulted in the death of dancehall goddess Ebony Reigns, had an expired license.

Prosecutors announced this in court as Okoh faces allegations in the death of the dancehall singer and two others.

Okoh was the driver of the car that killed Ebony in 2018. Along with Franklina Maame Yaa Nkansah aka Franky Kuri and Lance Corporal Vondee Atsu Francis, the dancehall singer died.

On the fateful night of February 8th, 2018, Okoh was driving a Jeep with the registration number AS-497-16, according to police.

He arrived at a position on the Sunyani-Kumasi highway between Nyamebekyere and Nsuta about 11:45 p.m.

Read Also  "Whether You Win Or Lose, I Will Fly You To Dubai" - Shatta Wale Promises Shatter Berry

There was a mound of sand on the lane, and he attempted to swerve to stop it, but he struck some railings at the road’s edge, killing everyone aboard except himself.

Okoh was admitted to the hospital and survived.

He faces charges of reckless driving and driving without a license. He has not renewed his driver’s license in three years, according to police.

Okoh is expected to report to court on March 24th.