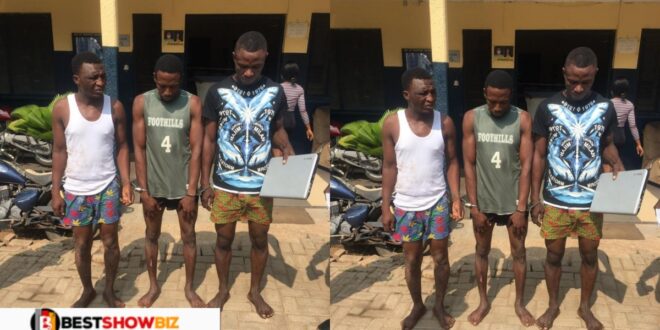 Eastern Region: Two guys were arrested after they were seen doing the ‘thing’ with a woman who was later determined to be a lesbian.

Two males allegedly defiled a 15-year-old suspected lesbian in Nkurakan, a neighborhood of the Yilo Krobo Municipality in the Eastern region.

Julius Boateng Tettey, a 25-year-old barber, and his accomplice, named only as Ire, are accused of committing the deed after accusing the girl and her friend of practicing lesbianism.

On Thursday, October 28, 2021, the Prosecuting Officer, Chief Inspector Owusu Ababio, told the Koforidua Circuit Court “A” presided over by Her Honour Marian Affoh that the accused persons live in the same house as the victim and her lover.

Out of suspicion, the accused confronted the victim and her companion with claims of lesbianism, which the girls apparently accepted.

The accused colluded and entered the room of the two companions at 11:30 p.m. to request sexual intercourse in exchange for money, but they declined.

This infuriated them. The accused dragged the victims into the room of suspect Julius Boateng Tettey in order to force sexual relations with them, but one of the girls managed to flee.

In turn, the two suspects forced sexual relations with the victim.

They then grabbed her two cell phones, each worth Ghc780. During the incident, the accused allegedly shattered the victim’s door and took her rice cooker, which was worth Ghc300.

The following day, the victim reported the incident to the Domestic Violence and Victims Support Unit, DOVVSU, at the Eastern Regional Headquarters.

The victim was given a police medical report to be examined by a doctor. The report was thoroughly supported and medically validated.

Julius Boateng Tettey was apprehended, but his other accomplice eluded arrest.

Mr. Boateng Tettey rejected the defilement charge, claiming that the victim is his girlfriend, but admitting to stealing the rice cooker and mobile phones.

Police investigators escorted the accused to the crime scene for further investigation; however, the suspect fled from lawful custody and was chased and apprehended.

When brought before Koforidua Circuit Court “A,” ruled over by Her Honour Marian Affoh, the accused pled not guilty to all six counts.

The accused was granted bail in the amount of Ghc60,000 with two sureties, one of whom had to be justified.