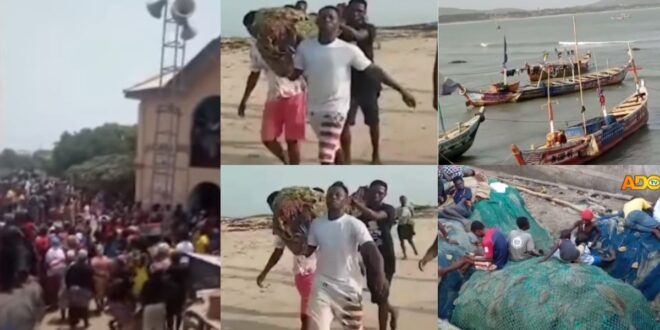 Drowning at Apam Beach; 12 of the 20 drowned children’s bodies have been recovered.

After about 20 children allegedly drowned on Monday, a total of twelve bodies have been recovered from the Apam beach.

The bodies of 12 people were discovered in the Gomoa West District of the Central Region on Monday afternoon.

According to Gilbert Mawuli Agbey of Graphic Online, a total of around 20 children were feared dead in the incident on monday.

It happened around 5 p.m., when children aged 14 to 17 traveled across an illicit path through a lagoon in order to avoid being seen by the beach’s leadership before swimming on the other side.

According to the knowledge collected, the children were swimming when a strong tidal wind blew, drowning them and carrying their bodies downstream.

Mr Moses Osakonor, the Apam District Police Commander, Deputy Superintendent of Police (DSP), confirmed the incident to Graphic Online on Monday afternoon [March 8, 2021]. He said his unit received the details about 6 p.m. on Sunday and rushed to the scene.

Two of the saved children are being treated at the St Luke Catholic Hospital in Apam and are supporting the police in their inquiries, he said.

“As we talk now, the lifeless bodies of seven of the youngsters, two girls and five boys, have been recovered and deposited at the same hospital’s morgue,” he said.

According to the witnesses, they were unable to recall the exact number of children in the water at the time of the crash, adding that “a 14-year-old boy who escaped told the police that there were more than 20 in the water.”

Read Also  "The guy blocked me this morning after having s3x with him last night, what's wrong"- lady seeks advise

He went on to say that the rescue team were out on the open seas looking for more bodies.