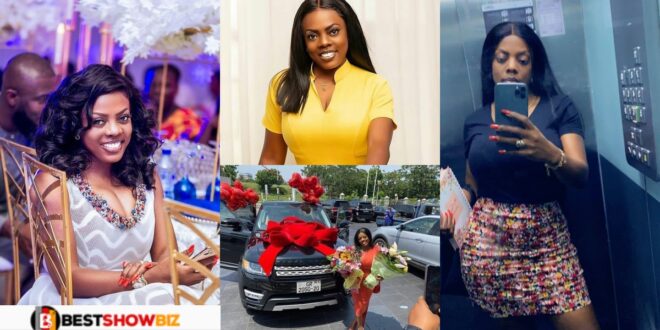 “Don’t put pressure on yourself, i don’t buy anything I use, people give me for free”- Nana Aba advises young girls (video)

Nana Aba Anamoah, a Ghanaian broadcaster, has urged her fans, particularly the young, to avoid copying and emulating celebrities’ lifestyles.

According to her, the secrets behind what celebrities allow the public to see are hidden behind the pomp and pageantry they display on social media. The majority of these lifestyles are either fabricated, unrealistic, or sponsored.

In an exclusive interview, Nana Aba Anamaoh stated that people who try to imitate her should understand that she does not buy the majority of the items she owns and wears with her money.
According to her, she has people or companies who sponsor everything she wears from head to toe, so anyone attempting to emulate her lifestyle will be disappointed.

Read Also  Jose Mourinho risks his life to distribute food to the elderly in coronavirus crises.

“Be a better person if you want to be like me.” Don’t make the same mistakes I did. I don’t usually buy the clothes I wear and post on social media. I can’t remember the last time I bought clothes, hair, watches, or other items with my own money. “Don’t be misled by what you see on social media,” she advised.

Nana Aba Anamoah went on to say that the youth should work hard and prepare adequately for their opportunities rather than breaking their backs trying to live and feel like their favorite celebrities.

Read Also  "we’ll shut down your embassies in Ghana if you deny us visa because of LGBTQ"-Hon. Mubarak Muntaka to foreign countries
Share