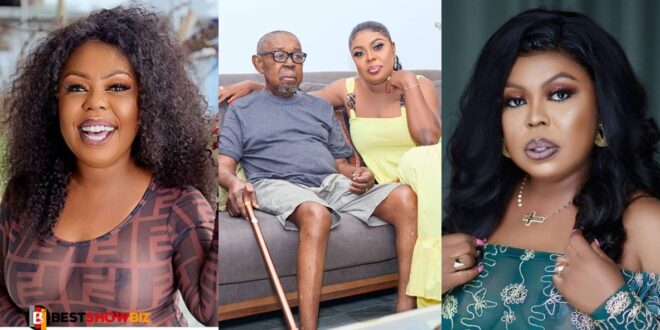 Afia Schwarzenegger, a popular Ghanaian media figure and comedienne, has spoken up about her father’s health issues.

The outspoken socialite described her father’s horrific cancer struggle in a post seen on her Instagram feed.

According to Afia Schwarzenegger, doctors warned her father (who would soon be 85 years old) three years ago that he would not live past six months.

Afia stated that he can shower, feed, and walk independently, which she attributes to her capacity to afford top specialists from South Africa and America.

Afia Schwarzenegger lashed back at those who have an issue with her father’s appearance in a post meant to praise her strong father of six.

She chastised her critics for acting as if they were smarter than her — advising her where to take her father for treatment, among other things.

She encouraged her “dubious” counselors to adopt her father and move him wherever they thought was best for him.

“This is my father, turning 85 soon..survived Cancer even though we were told by doctors he couldn’t make it pass 6months..its been 3 years and counting by the grace of God.
He walks,feed n bath himself at this age with no stress.
I pray today for long life n Good health for whoever is reading this with no malicious intentions!!!!
Those of you that have Problem with how he looks can come and adopt him n keep him that hospital you are suggesting since you are wiser than your soul…
Take your father to a hospital abroad, really if I can afford doctors from South Africa and America, what more of a father to 6 SUCCESSFUL CHILDREN..DO YOU WANT THE ROLE CALL??
Some of you are so stupid I don’t know whether it’s DNA or DNA.“