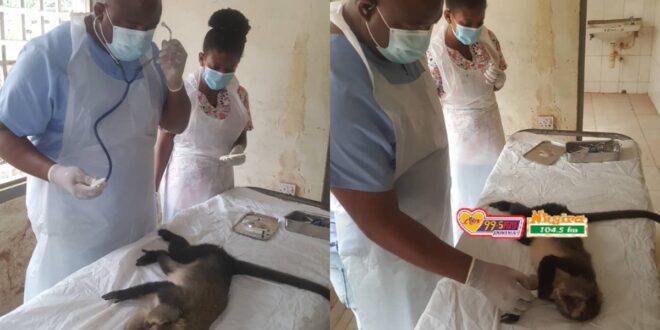 A mona monkey at the Kumasi Zoological Gardens has given birth via a C-section to a baby male primate.

The operation was done by Dr. Meyir Y. Ziekah, vet doctor and owner of the Kumasi Zoo.

This occurred when a monkey had trouble with natural delivery owing to a rather small birth canal.

According to Dr. Ziekah, one hour and 20 minutes of surgery was “complex” due to the shortage of equipment and instruments required.

“She has been in labor for three days and we have been monitoring it. On the first day, we realized that the birth canal was quite small and the infant had a big head that couldn’t pass through the birth canal and the animal was getting weak so we took the decision,” Dr. Ziekah narrated.

While the mother and baby monkey were stated to be doing well at the Kumasi Zoo nursery for the first time, he said things had taken another turn.

“When she recovered from the anesthesia, she was a bit aggressive towards the infant and separated from her. Later on, she accepted the infant but in the night she became aggressive again and later rejected her completely and unfortunately, we lost her,” he said.