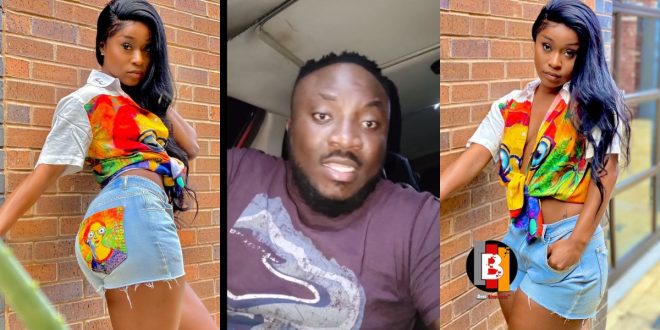 DKB: “Efia Odo Should Never Be Called An Actress; She Can’t Boast Of Even 5 Movies”

Popular Ghanaian Comedian Derrick Kobina Bonney (DKB) is not done with his feud with the US-born Ghanaian socialist, Efia Odo as he has launched another attack on her.

The comedian who has a grudge with Efia Odo has this time expressed displeasure over how the socialist is tagged as an actress. According to DKB, Efia cannot boast of even 5 movies so does not qualify to be called an actress.

DKB also said directors and producers who are using Slay Queens for their movies are not helping the improvement of the industry. He added that those who are not in support of his decision to discipline Efia Odo are fools.

The comedian air this in the recent interview with zionfelix where he addressed the insults Efia Odo heaved at him on radios and social media sometime ago.

Recalling, the socialist went berserk on social media; insulting DKB and said he is not funny and gives dry jokes. Meanwhile, Efia got infuriated to go dirty on social media after the former said she is not contributing positively to the industry and all she does is to remove her panty and post nude photos online.