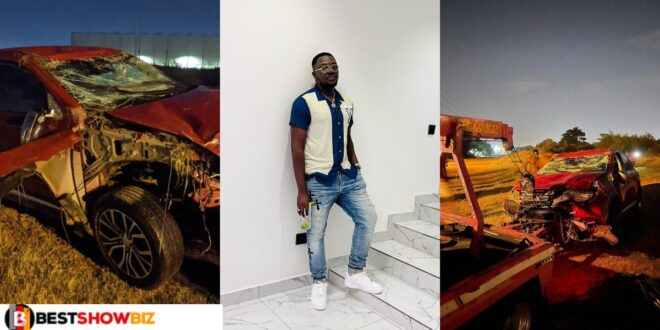 DJ MicSmith recalled how he narrowly escaped death twice on the Tema motorway and ended up in the police station the second time because someone died on the spot.

DJ MicSmith expressed his appreciation to God for his life, recalling how he nearly died a year ago on the Tema Motorway when his car somersaulted after being off the road, but he was rescued and God delivered him from the grip of death.

The second disaster occurred on the Tema Motorway, this time involving a motorcyclist who died on the spot, and that is how he ended up in the police station, where he was allowed to leave after an investigation.

Read Also  "Agya Koo can not be used in any serious movie roles"- Mr. Beautiful

DJ MicSmith then thanked everyone who helped him through that difficult time in his life, as well as the Ghana police for thoroughly investigating the second incident and finding her to be innocent.