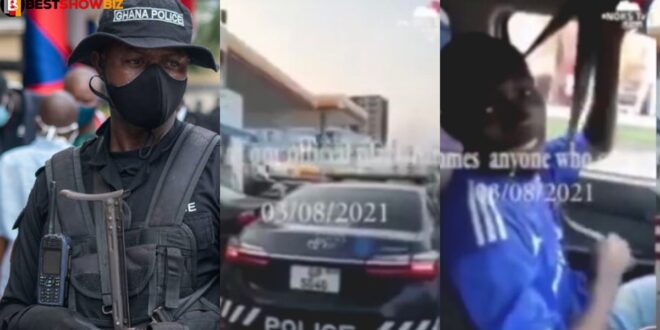 The Ghana Police Service has agreed to look into a video that shows one of its officers accepting a bribe.

When the officer is found guilty of misconduct, the police have guaranteed the public that he would be properly punished.

Witnesses on social media videoed the incident and posted it on the internet.

According to the social media user, he took an Uber and a police vehicle crossed the Uber and ordered the driver to stop after only a few minutes in the vehicle.

The motorist was told that until he paid 200 cedis, he would be arrested.

He demanded the money, ordered the driver to cancel the trip, and seized his driver’s license.

Read Also  I Only Took Abena Korkor Home, Vanessa Should Know This Before It Comes Out-Funny Face Confesses in a new video

When the driver said he didn’t have any cash on him, the cops escorted him to a mobile money seller where he could withdraw cash to pay the bribe.

Fortunately, the passenger captured the entire incident on his phone and published it on social media.