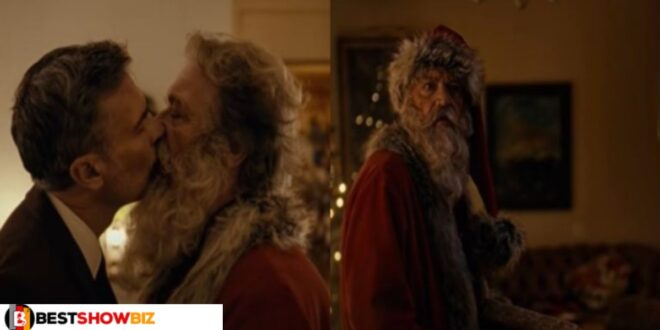 Decriminalization of LGBT: Santa Claus gets a boyfriend as they make love in new video

After airing a Christmas TV commercial in which Santa Claus meets the guy of his dreams, the Norwegian postal service sparked outrage online.

Titled The advertisement, ‘When Harry Met Santa’, memorializes the 50th anniversary of Norway’s decriminalization of homosexuality, which took place in 1972.

The commercial starts with Harry walking downstairs to see a surprised Santa putting gifts under the Christmas tree before vanishing.

He finds Santa poring over a black and white photograph of himself from his youth when he gets downstairs.

For the third year in a row, Harry dresses up as Santa and falls asleep on the sofa.

Santa grins as he wakes Harry up with a gift and promises that he will return next year.

The two have a drink and a laugh the following year before Santa returns to his task of delivering presents.

Harry decides to write Santa a letter, telling him that “all I want for Christmas is you” after yet another year of waiting.

Harry expects to see Santa when the doorbell rings later, but it is just a neighbor delivering some parcels addressed to him.

Harry gets his wish and kisses Santa when he returns to his living room.