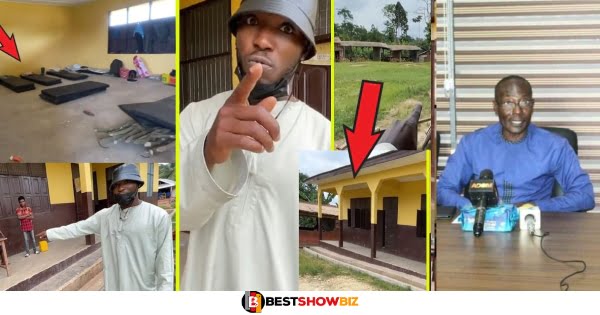 The DCE for Akrofuom, Hon. Maurice Jonas Woode, has requested that Teacher Kwadwo, a former GES employee born Micahel Owusu Afriyir but better known by his stage name Teacher Kwadwo, retract and apologize for the lies he told about him in a self-produced video four days ago.

The comedian said last Saturday that several influential members of the GES had expelled him despite his assistance in constructing a new building for his village school.

He claims that GES and the school’s principal at Akrofuom District’s Kofi Kyeremah Basic School have since chosen against using the new school building and instead turned it into a temporary dormitory for some forestry officers who have the support of the DCE.

The fact that the underprivileged students are still being housed and educated in the outdated school building while the new block turns into a white elephant outrages Teacher Kwadwo, as he said in the video he uploaded.

He explored the subject in depth in an exclusive conversation with Rashad of GhPage.

To learn all the specifics of the entire affair, watch the video below.

Read Also  "Just like in the movie 'Venom,' God speaks to me audibly." – Majid Michel