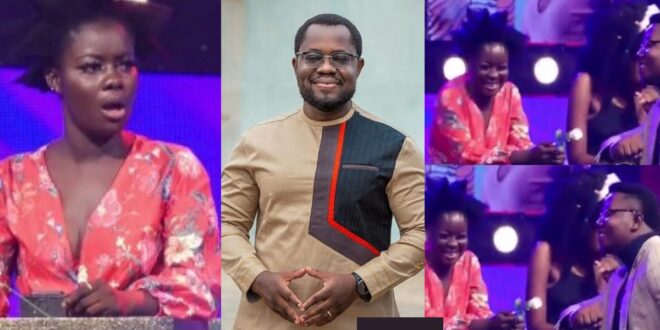 #Daterush: Giovanni goes on his knees to apologize to Fatima for insulting her

As previously mentioned by bestshowbiz.com, Giovanni Caleb, the host of TV3’s Date Rush program, is in trouble by some Ghanaians for making a joke of Fatima. Giovanni Caleb, according to these die-hard Fatima supporters, went below the belt this time, and they think it’s past time for him to apologise to her.

The whole girls were swept off their feet by the romantic display from Kingsley Kese, during Sunday’s (March 21, 2021) edition of the Date Rush show, by giving each of the 10 beautiful ladies a flower.

After Kingsley Kese’s grand entrance, Giovanni Caleb made a bold remark, saying, “Everyone deserves a rose, including Fatima.” Some Fatima fans interpreted the comment as an insult, saying that he should be more careful with his expression, as if Fatima was not deserving of the flowers she received.

Taking a look at some of Fatima’s most passionate fans’ responses below.

As the fourth season of Date Rush comes to an end, Giovanni Caleb has officially apologized to Fatima. Although finishing up this week’s segment, Giovanni seems to have taken care of all the critiques from the fans and viewers by taking command and manning himself by giving a touching apology to Fatima.

In response to Giovanni’s apology, Fatima claimed on the record that she has no grudges against the host. She also confirmed that they are good friends behind the scenes, and that Giovanni can attest to the fact that she is a free spirit. She acknowledged his apologies by saying what she wanted to say.