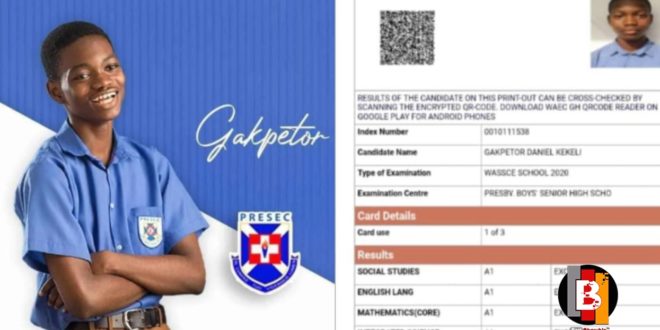 2020’s WASSCE results have been released by the WAEC since Friday, November, 13 and there have since been torrents of results slips circulating the internet with mixed performances.

The latest result slip to pop up is that of Daniel Gakpetor, the young man whose academic brilliance became evident during this year’s just-ended National Maths and Science Quiz (NSMQ).

Daniel Gakpetor was a student from the Presbyterian Boys Senior High School (PRESEC LEGON) and he was among the team who led their school to their sixth NSMQ title.

His outstanding performance during the quiz got him a scholarship award worth $40,000 from Academic City College to pursue a four-year undergraduate program BSc. Electrical and Electronics Engineering in Accra.

After Daniel set the pace during the quiz competition, we were all hoping to find out how he comes out in terms of results in his final exams. Well, the results are out, and Daniel, who never disappoints, has done it again

Daniel Gakpetor‘s performances at the end of the WASSCE is a carbon copy of what we witnessed in the NSMQ as he has scored full marks.

Daniel is indeed a brilliant boy and he has a great future ahead of him. We wish him all the best.

See his results slip below;