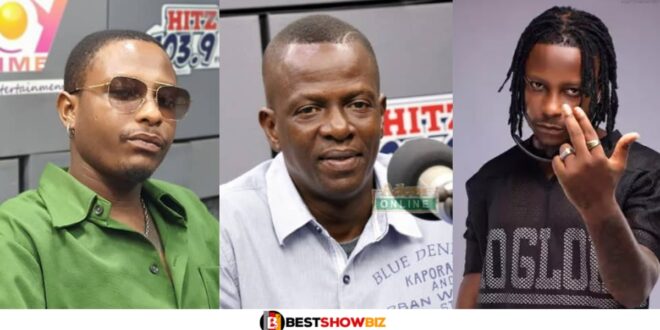 Da Don apologizes to Kelvyn boy after he called him stΰp!d (watch video)

Following the insults he flung at Kelvyn Boy on the Usaywetin show on Tuesday, September 13, 2022, Hitz FM’s programming manager, Prince Tsegah, nicknamed “Da Don,” has at last apologized to him.

In a now-viral video, Da Don called Kelvyn Boy “f00lish” since the latter claimed that he would definitely go insane if he decided to stop smoking for even one day.

A lot of important people in the media and Ghanaian music, like Shatta Wale, criticized Da Don for calling Kelvyn Boy stupid.

Da Don has apologized to the ‘Down Flat’ hitmaker following the criticism.

When Andy Dosty was hosting the “Daybreak Hitz” program on Hitz FM, he made an apology.

Read Also  'Stonebwoy made me who I am today'- Kelvyn Boy says after fighting with stonebwoy in the past.

He said that his remark was only a pun and that he had not meant to disparage the musician.