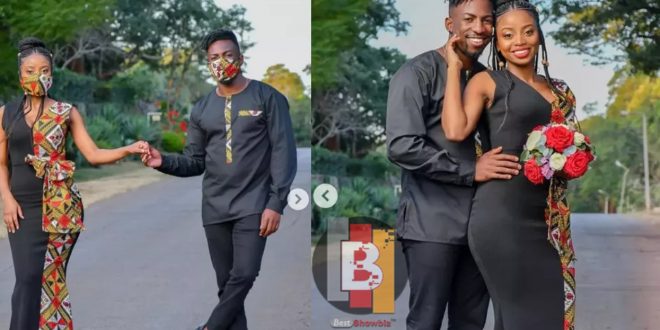 Meet the Cute Couple Who Met On Instagram & Got Married – Photos

A couple from zimbabwe has caused a massive stir on social media after they disclosed how they build their love through social media which eventually led to getting married.

The couple who identifies themselves as Tinashe and Airborne shared pictures from their wedding alongside a massage that gave a brief of their love journey since they met on social media. i.e Instagram.

Tinashe who shared their story indicated that though everything proves they were met to be together, their marriage wasn’t an instant shot, Tinashe had to be patient even if she was burning inside.

Hi Guys, we are the Masangomai’s – Tinashe and Airborne, born and bred in #Zimbabwe. We will be sharing snippets of our story with you in the next few posts.

To start, we will tell you guys where and how we met. Like most millennials, we are screen addicts and so it’s no surprise that we met online, via Instagram I followed Airborne first after seeing one of his dance videos (I’d danced a bit in high school myself so that peaked my interest)

I also then liked a few of his photos in hopes that maybe he’d reach out, (lol I shot my shot), he followed me back but didn’t reach out for an entire month. He says it was a particular post of mine that got him to finally DM me(how is this for an opener?) “Tinashe..”

After some back and forth we made arrangements to have breakfast together literally the following day. Both of us are foodies and so this was naturally the perfect choice. We met in person for the first time on a Saturday morning and headed to breakfast, let’s just say the rest is history.

Dating was a whirlwind, being creatives we found ourselves expressing our different tastes in fashion, food, wine, and football together, learning each other and helping each other along the way, Airborne even became my personal stylist at one point (still is)

see more pictures of the couple below: