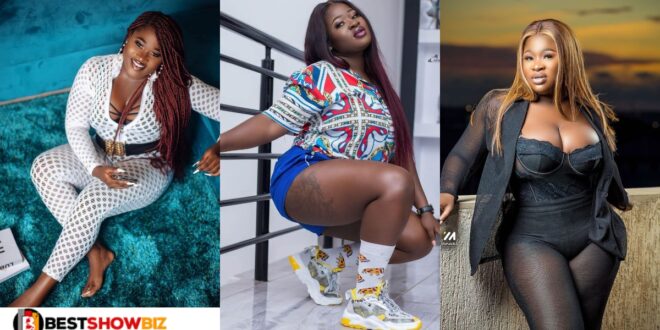 When did singer Sista Afia get married and no one, including prominent gossipmongers, knew about it?

Fans of Sista Afia’s page were left with the following question after she shared a video on her page.

Sista Afia teased music fans with a video of her yet-to-be-released song, but attention was attracted to something peculiar in the video.

Sista Afia looks to have tied the knot on the other side of the world. A ring was discovered on the ‘JeJe’ hitmaker’s finger.

She boldly flaunted it in the video, sort of declaring that she’s no longer on the market.

Sista Afia is one celebrity that keeps her movements a well-guarded secret. She does everything she can to keep her personal life out of the limelight so that her admirers can focus on her career and music.

Read Also  Beautiful couple shares how they were able to do a wedding with little to no money at all.

Sista Afia may be married, or she may have placed the ring on purpose to deceive gossipers like us or to gain clout.

It’s also possible that the artist is doing this to fend off suitors.

Another idea is that the singer’s new body shape has attracted someone who has pledged to marry her, and the ring is a symbol Mr. Right has provided to keep her around.

Sista Afia is poised to release another banger to keep her fans entertained.