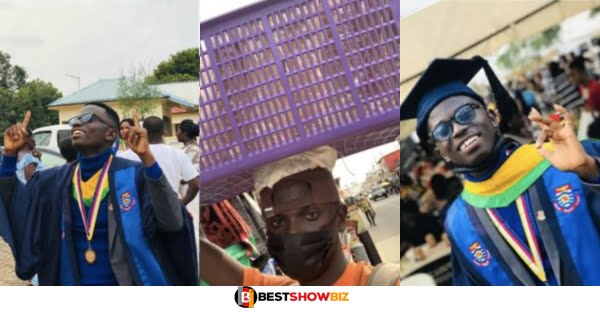 Congratulations: He sold bread to pay his university bills, now he has graduated with first-class honors

Many individuals have given up on their goals of becoming better people in the future throughout the years just because they didn’t have the money or someone to sponsor them.

Nathan Addo Larbi’s narrative tells of his transformation from a destitute family with no sponsorship to a first-class student with a side business affiliated with a UK-based enterprise.

Nathan, like many other young people in the nation, came from a poor family and found it difficult to subsist, but with a strong drive to succeed, he went to the University of Cape Coast and was accepted.

He was able to enroll due to his own hard work and that of his parents, but that was when he was confronted with the fact that he would have to hustle simply to be able to see himself through school.

Read Also  "I am friends with Mona Gucci for 5 years, I don't know of any law school she attended"- Nana Tornado

According to him, he began selling bread on the streets, which required him to skip multiple lectures in order to make a respectable living and pay his tuition.

He added that he was criticized by some of his mates who saw him hawking bread on the streets, but that didn’t stop him from working hard to attain his objective.

Natan was among those who graduated from UCC with first-class honors last Thursday.

SMC is now in an equity cooperation with Umoja Generation Wealth, a UK-based corporation.

The former bread vendor explained that he wishes others will take a page from his life and not give up on life.