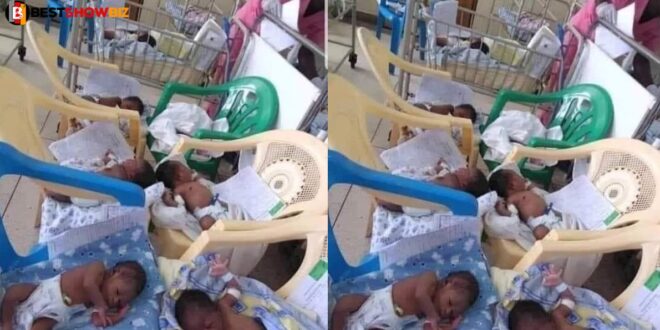 Confirmed: Photos of newborn babies sleeping on plastic chairs is not Ghana but Uganda

Several African countries have been labeled as underdeveloped due to the failure of most systems, particularly in the health sector.

Ghana is no exception to some of these malfunctioning institutions, with the majority of the country’s hospitals receiving harsh criticism.

A photo of newborn newborns resting in improvised beds, which happen to be plastic chairs, recently went viral on Ghanaian social media.

The photo garnered a lot of attention from Ghanaians, who slammed the government for failing to provide adequate health care.

Surprisingly, the photo of the babies sleeping on plastic chairs is from Uganda, also an African country, and not Ghana.

When a user with the name @AmistyTV shared a photo of three newborn kids lying on plastic chairs as part of the #fixthecountry hashtag on Twitter, it went viral.

Read Also  See how this pregnant woman was been transported to hospital in Ghana, so sad in this modern age.

In the comments area of Twitter, many expressed their dissatisfaction with the government’s handling of the situation.

Nana Aba Anamoah responded by retweeting the same photo, saying that it was not taken in Ghana, but rather in Uganda in 2018.