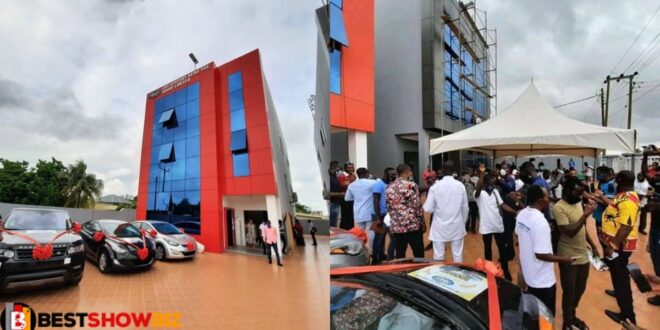 Chy-Mall turns out to be a scam, Ghanaian customers asking the government for help to get their money back

Hundreds of thousands of consumers have been defrauded by another Ponzi scheme, Chy-Mall, an online trading and marketing service, despite regulators’ warnings months ago.

Readers of bestshowbiz.com will recall that the Economic and Organised Crime Office (EOCO) and the Securities and Exchange Commission (SEC) advised the public against engaging with the company as a Ponzi scam.

Customers can purchase a product online from a virtual shop through free registration, according to the company’s procedures.

Customers then choose from a variety of investment packages ranging from Gh770 to Gh9,240.

All of the warnings came true, as victims and potential victims who were fortunate enough to avoid joining despite the pressures have recounted their stories.

Due to privacy concerns, bestshowbiz.com is publishing the comments anonymously.

Invest 3000gh and you are given 47gh every 15days for a period of 1year and you believe it’s a good business ? Don’t look at me🌚

Read Also  "I lost my brother to money ritual"- Comedia warris recounts the sad secret of his life.

Sad truth is,a new one will soon emerge and people are still going to fall for it. Ah! Sometimes I wonder if people have brains in their head.

Try advising people against it and see the insults you go chop. Two highly educated ‘friends’ sent me flyers and brochures to join, was soo surprised I called to check if it was really them. Long and short, them chop them big time. Like biiiig money.

There’s a lady on here who insulted me basabasa for calling it a scam. I wish I’d written her name somewhere so I could give her a shout out🤗🤗🤗🤗🤗

I told a friend not to invest in such things because the outcome wouldn’t be good news and he nearly ended our friendship because he thought I was against his progressA colleague asked me to join and I refused. Now she doesn’t even smile with me 😀😀😀

So who asked this guy to bring chy matter here? I thought we’re here to help people emotionally and not the other way round?🤔🤔

Somebody should advise him to remove the post wai 😀😀😀😀

when someone asks “what bussiness can i do with 5000 cedis “ then you see them 😂..now mo na mo sh3 h) no I had been seeing a friend status chilling in car n spreading money around him bragging. Come to think of it,now everything changed around him. He hardly post or u seeing him online sef

It has ended in tears ooo hmmm. Am glad I withdrew some before this happened. I have advised myself.they were given e-loans n re-invested same whether u like it or not. so u can’t withdraw ur dividend till ur loan is fully paid. people are born scammers

A friend told me he doesn’t have money when I needed loan badly. He invested that money into ChY mall. The way some man bi nearly slapped me in a taxi er. He had invested $2,000 and convincing the taxi driver(who happens to be his old co-tenant) to invest. I told him it’s a ponzi scheme—which would collapse as soon as the scanners hit their target just like loom and Menzgold 😂. I’m sure he’ll remember me now One person came to disturb me saaaaa then I did it, my 1550 is in water😭😭 the way Ghana make hot like this😒😒😒

Because of CHY MALL I lost 2 friends.
I told them I’m a victim of a few investment scams so I don’t do those things again. That’s all. I didn’t support them to make money 🤣🤣. That means I hate them. E hard oo
I wish them well by the way 😤

In schemes such as chymall, there are always winners, losers and some people who’ll neither win nor lose

Initially everything was going on well and I was making money until they decided to upgrade our accounts. I became suspicious and quickly sell my account 🤭🤭

Hehehe, my colleague at work was doing it gidigidi and convinced me saaa I nearly invested my 7000 cedis. Chai, see me running to thank God lolSomebody insulted me for describing this thing a scam. Infact I was told I am too ignorant. Well they deserve all of it

Someone introduced it to me and also sent me pictures of successful people who made plenty money. I said me, pay money to an account I don’t know the source d3 no.
Few weeks I heard CHY mall is now history. 🤣🤣🤣

Other Ponzi schemes such as GCCH, Menzgold and Petropay have all collapsed with its owners facing investigation.