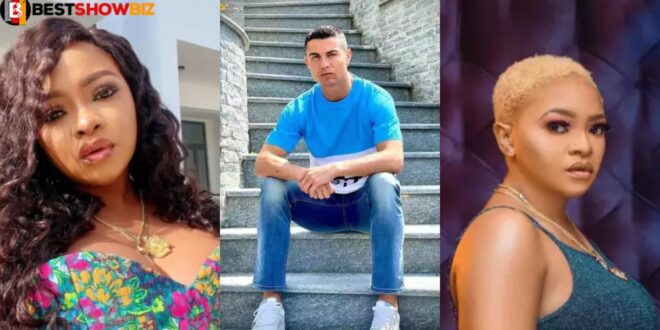 Christiano Ronaldo’s Nigerian girlfriend reveals she has broken up with him. Here is why

Did you know that Cristiano Ronaldo, football’s G.O.A.T (greatest of all time), had a Nigerian admirer who could not stop thinking about him? If you did not already know, now you do.

Orijafunmi Awelewa, a Nollywood actress, is dissatisfied with Cristiano Ronaldo.

She claims she has been providing the Juventus hitman and Real Madrid star with “eye service” for some time and has even dreamed about dating him in most of her sleeps, but none of them have resulted in anything concrete.

As a result, she is unable to conceal her sadness and guilt at being overlooked.

Despite the fact that the actress is relatively unknown and does not have a large following, she has done everything she can to attract his attention but has received no real response.

She made the remark just seconds after Ronaldo set yet another record or reached a milestone in his career when he became the first man and footballer alive to reach 300 million Instagram followers.

The magnificent achievement caught the attention of the crowds, who flocked in to pay their respects and congratulate him on his achievement.

That is when Funmi Awelewa’s remark was discovered.

She claims she no longer loves or has a crush on him, after years of unsuccessful attempts to catch his attention.

She had had a crush on the five-time Balon d’Or winner, who also happens to be the captain of the Portugal national team, since she was in secondary school, which was roughly 4 to 7 years ago.

Furthermore, Funmi stated that she has sent personal messages to Cristiano Ronaldo on his social media pages in the event that he claims he did not read the comments she has been writing in an attempt to gain his attention. She then came to the conclusion that she no longer loved him and would no longer hold him in high esteem.

Many internet netizens have reacted to her remarks. Netizens’ reactions to her remark can be seen and read here;