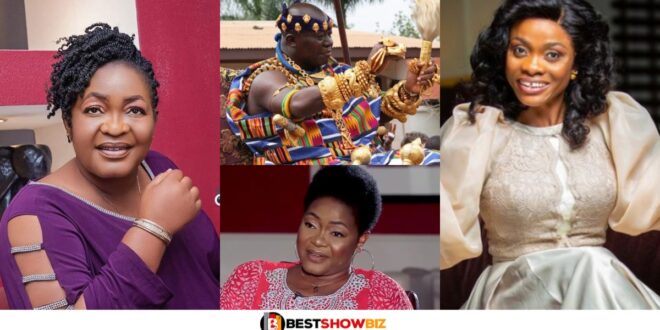 A gospel singer from Ghana named Diana Asamoah talked about the death of Queen Elizabeth II over the weekend.

She asked Otumfuo Osei Tutu II and President Akufo-Addo for Ghana to have its own tribute to the late Queen’s funeral, which should be hosted by the Asantes.

Diana Asamoah asked Nana Otumfuo in a Tiktok video to plan a memorable funeral for the Queen. It is well known that Asantes are the best at planning and carrying out dignified funerals.

Many Ghanaians were upset by Diana Asamoah’s proposal to Otumfuo and attacked her online in a cruel way.

They said she was selfish and asking for small things when the country had many more important problems to deal with.

Christiana Awuni, a prominent actress from Kumawood, has joined the large number of Ghanaians who truly believe Diana Asamoah has gone nuts.

In an interview with Adepa TV, Christiana Awuni, stated her extreme disapproval of Diana Asamoah’s pointless plea to Otumfuo.

The Ghanaians are not pleased with Diana Asamoah’s words that defy common reason, therefore she advised her to shut her filthy mouth if she has nothing rational to say.

To learn more, view the video below.