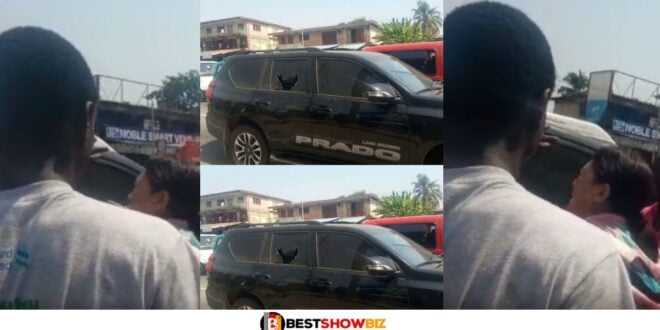 A Chinese woman, who has yet to be recognized, was attacked and shot during a robbery at Caprice on Accra’s Circle-Nsawam Highway on Friday, December 9, 2022.

Eyewitnesses say that the four armed thieves approached the victim while she was driving on the stretch in a Landcruiser Prado with the license plate number GN 8188-22.

The suspects are said to have followed the victim for a distance with motorbikes before they fired randomly at the car when they came close.

“They got down to unlock the car from inside and demanded that the woman hand over her bag, but she struggled with them over it, and one shot her in the arm,” a witness narrated.

Another witness who helped the victim after the robbery said that when she got to her, the victim’s fingers were almost falling off.

The thieves ran away with an unknown amount of money in a bag, which shocked onlookers. However, some spectators transported the victim to the nearest hospital.

Meanwhile, police said in a statement that they were looking for the group of thieves who attacked and shot the woman.

“Special intelligence and operations teams have been deployed to trace and arrest the suspects involved; we will surely get them arrested to face justice.”

“The victim is in stable condition and receiving medical attention,” the police statement concluded.

Read Also  "I don't go to church, I Don't need it to have salvation"-Sister Derby